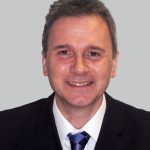 Heading the Flexitrans team of freight forwarding experts, Jim has been in the business for 30 years and has gained a wide ranging knowledge of the transport business working his way up in a traditional apprenticeship commencing as a ‘customs dock runner’ at 16 years incorporating duties as a customs entry clerk, trailer transport operator, freight forwarder & office manager. 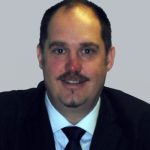 Jamie has progressed from an office junior to a Director and shareholder of a new dynamic and exciting freight handling service provider.

At the age of 16 he spent much of his time presenting documents to fellow agents, HMC and Dock officials, as well as being guided as to the do’s and don’ts of ships agency, meeting a wide variety of people such as crew and deck hands, first mates right up to the ship’s skipper.

At the age of 17 money ruled the world and Jamie changed his direction a little to encompass Scandinavian and European forwarders and Customs Clearance developing into what we now call today a supervisor, but then at the age of 17 Jamie was 2 away from the M.D.

After a couple of years Jamie had the opportunity to join a project forwarding company based in Felixstowe working as the P.A. to the M.D. Jamie gained much experience in most aspects of project forwarding in the North Sea Oil industry – so the question to detail is no stranger to him. He gained much experience in moving such things as a packet of nuts & bolts to a 40Mtr long 200T reactor, from a small van movement to a helicopter transportation.

Jamie has also gained experience in controlling various European trailer agencies that included over seeing route planning for delivery of trailers throughout the UK and subsequent reloading of export traffic back to the continent as well as coordinating all sales and finances and haulier/sub contract hire. To compliment these trailer agencies, Jamie also gained experience in general freight and European forwarding, Jamie has managed to build up a vast expanse of knowledge relating to these markets as well as implementing an extremely large and trustworthy haulage and transport subcontractor base for groupage, part load, full load and abnormal loads/transports throughout all of Europe.

Jamie was fortunate to get involved in it all. 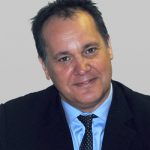 Bob is also the Managing Director of Magnum Group Ltd, however being a close personal friend of Jim and Jamie’s it was an easy decision for him to make to help them establish Flexitrans.

Bob is on the board of Flexitrans, which allows them to utilise his 35+ years experience (25 as MD of Magnum) to help guide and steer the company forward.

The limited time he has outside of Magnum and Flexitrans is spent either on the golf course or clay pigeon shooting. 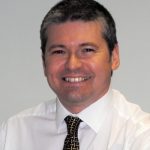 Ed has over 23 years experience in all aspects of deep sea forwarding having worked with several worldwide container lines, and it is his role to market and develop the deep sea services at Flexitrans Ltd to compliment their European road transport operations.

In September 2001 Ed first passed the Dangerous Goods Safety Advisors exam, and is qualified to advise on safety matters for hazardous cargo for storage and movement by road transport. This had added a new dimension to the services that can be offered by Flexitrans. 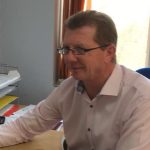 Adrian started his career path in transport in 1975 working as an Office Junior and Import Clerk at  British Commercial Transport, later to become Baxter Hoare.

In 1984 Adrian moved into Trailer Transport with Nippress Forwarding in Hull as an import Clearance Clerk and Transport Operations, and subsequently in 1990 joined their Felixstowe office in operations and business development.

Adrian subsequently diversified his skills by joining a freight forwarding company working on their Italian and French business, before moving to a local Trailer Operator for 14 years as their Sales Executive responsible for sales and customer services.

Within the European Transport Market, it is imperative that a quality control system is in place to ensure all documentation, in particular CMRs/PODs are obtained, checked and forwarded to customers whom command documentary evidence of the delivery.

This is Christines’ main role at Flexitrans, but she also incorporates invoicing, and general administrative duties, to ensure a smooth and efficiently run administrative department.

"Thanks for this, will come back to you in the new year. Thank you for all your help this year, we couldn’t do what we do without your help, it is appreciated!"

"Thanks very much for your great service. I’ll be in touch when I have another movement."

"Thanks again for your help and general 'hand holding' throughout the process."

"Flexitrans have again demonstrated how customer focussed they are and have clearly shown their flexibility and logical attitude to resolving problems. A massive thank you to everyone involved!"

"Thanks for all of your help arranging delivery of this shipment so promptly."