June 2013 When a major shipper of used plant and machinery brought a JCB Backhoe Loader to Flexitrans to load into a 40’ High Cube container for shipment to Beira, Mozambique there was a problem – the beforehand given dimensions of the JCB were erroneous and it wouldn’t fit! 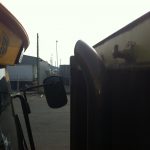 Indeed, it was suggested by one observer that the only way the JCB would fit was if the container was like Dr Who’s ‘Tardis’; bigger on the inside than on the outside!

The options appeared to be to load the machine into an open top container or to ship as RORO, both of which would have been far more expensive than the price for the container that the shipper had already budgeted for.

Faced with this challenge the team at Flexitrans thought about inventing a Tardis container, but sadly there were no Time Lords available and so instead arranged to have the wheels and other parts removed until the machine could be slid into the container allowing, to the delight of the shipper, the machine to be shipped to Mozambique on time and on budget.

Thus proving that you don’t need Dr Who and his Tardis to make your cargo fit, just Flexitrans and their “out of this world” service! 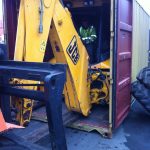 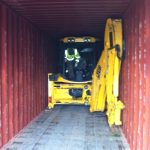